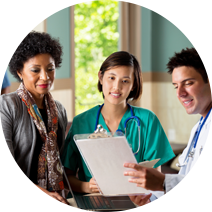 A local Healthcare Staffing Group connects medical professionals with employment opportunities in allied health and physical therapy as well as local, travel, and contract nursing. After an internal review, the staffing agency managers discovered that they were experiencing a number of bottlenecks, data quality control issues, and errors in pay quoting that were affecting their bottom line. They approached Kopis with four goals for a custom-built software solution:

1. To speed up the time it took to create user profiles. The faster they can get candidates in front of facilities, the more competitive they are in the industry.

2. To create a more functionally-driven system. Their current system was data-driven and didn’t have the functionality or flexibility they needed, resulting in too many mistakes in user profiles.

3. To create a cue-driven system that would walk each recruiter through the same process to build a user profile.

4. To include a component that would give recruiters the power to negotiate rate quotes in real-time.

“I have always been a buy versus build guy, but our industry is technologically underdeveloped. Since there are a limited number of off-the-shelf products available, I had to completely change my mentality,” said the Chief Information Officer. “There’s simply nothing out there that meets our needs. I know from experience. Before hiring Kopis, we owned and used two of the biggest software products in our industry — they were adequate to run our business, but not to grow our business.”

In order to increase business, the staffing group recognized the need for a robust, powerful platform that gave their recruiters real-time negotiating in quoting, automated the approval process, eliminated data errors, and got every recruiter on the same page.

According to the CIO, “Our margins and efficiency drive profitability. But we had recruiters managing their desks differently, negotiating pay with candidates on the phone and then hanging up to create a rate sheet. This method was taking too long. We’d lose candidates to other jobs and, even worse, there were too many errors. We’d end up with a 15% margin when we thought we had a 25% margin.”

With these needs in mind, Kopis developed a custom software solution to include a rate sheet that shows recruiters their margin in real-time and displays a floor that recruiters can’t go below without supervisor approval. The custom-built software made the client’s recruiting process faster, more internally consistent, and less prone to user error.

The senior management at the staffing group interviewed several competitors to develop a custom software application that would solve their problems. They chose Kopis due to their experience and their use of the agile process, which is a project management methodology that allows developers and their clients to work together to find solutions through an iterative and collaborative process, implementing new software in stages. Agile is a better way to work because, by definition, the process encourages client input and feedback throughout the entire development process, promotes quick response times to changes, and sets the stage for ongoing and continuous improvement.

Using agile process was the right call, according to their CIO. “We had challenges along the way, but they were mostly challenges internally. We weren’t mature enough, yet, as a company, to know all of the problems and all of the needs upfront. We didn’t really know what we would need until we saw it at each step. The agile process enabled the project to evolve and grow as we did.”

Overall, the results of the collaboration between Kopis and the Healthcare Staffing Group were both profound and far-reaching. By their account, they noticed increased productivity within the first few months. “There were a few hiccups when we went live, but that’s just because people weren’t used to a cutting-edge software that impacts everything we do. The number one thing we needed the most was productivity, and I’m certain we got that. We immediately were able to see our weakness in our candidate pipeline. After a month or two of implementation, around January, we broke some productivity and sales records. No doubt we believe that was the direct result of our custom software.”

Even more importantly, though, the software itself and the use of agile process challenged how the company grows and conducts business, changing their corporate culture from the top down. “One of the things I’ve noticed is the software actually helped leadership focus more on what matters, to think differently,” said the CIO. “We’re now willing to sacrifice headcount, or volume, to go after profitability, which we’ve never done before. We’re measuring more than ever before, watching our margins, comparing and reconciling, more than ever before. The software actually made a case and gave leadership and ownership more say.”

“This was a project of software and culture change.”