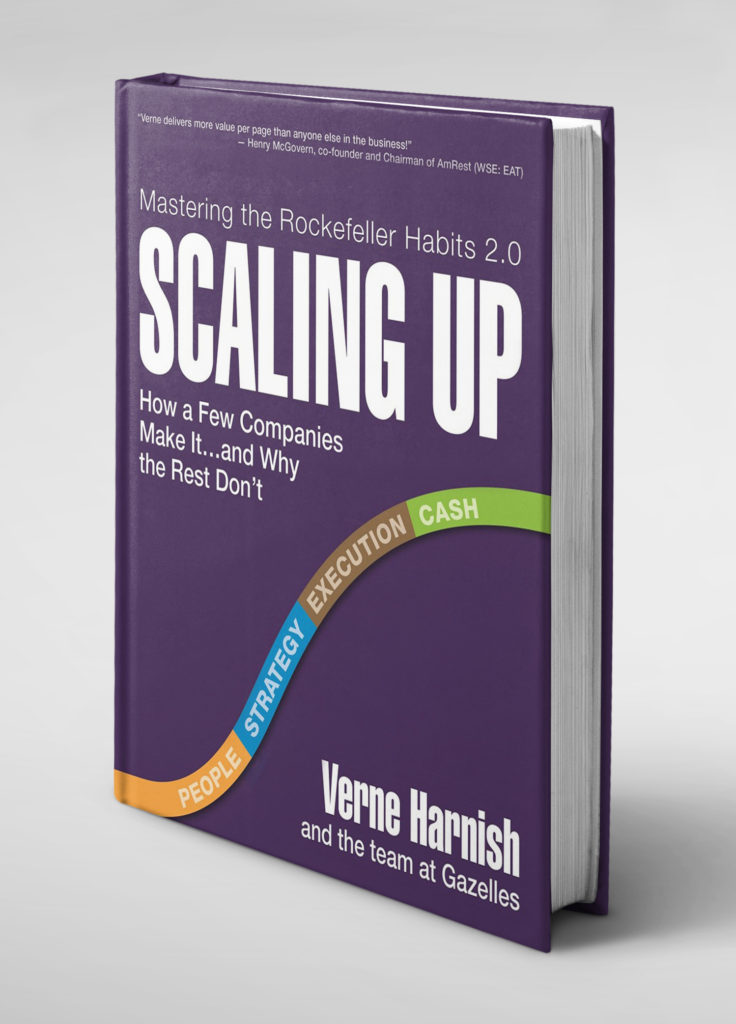 You know those big book business plans that you mean to read but never get around to? The ones that sit on your desk for months, that you start over and over again without ever seeming to make it past the introduction? Scaling Up by Verne Harnish is nothing like any of those. Instead, it provides an actionable, pre-defined framework for growing your company from the inside out, walking business leaders through a series of processes and procedures, each with accompanying forms.

To me, the best thing about Scaling Up is that it’s completely customizable to your company’s needs—a hundred different CEO’s could read the book and take a hundred different paths to success. The overarching recommendation Harnish makes is to take an iterative approach to the forms and exercises in his book, beginning where you’re weakest, implementing and perfecting his procedures there, before moving on to another area where you need change.

When I first encountered Harnish’s book, I read it through once to get a general sense of the layout, and I asked my leadership team, Adam Drewes and Kevin Wentzel, to join me. We began with the suggested meeting cadence, putting daily, weekly, quarterly, and annual meetings into place—writing them on the calendar for the entire year—each with a different focus or objective. Scaling Up provided us with a tactical guidebook for these meetings. For example, at our daily meetings, the focus is specific obstacles. What is standing in the way of an incredible 24-hours? Yes, the framework does get this specific.

After we established our meeting cadence, we got to work on the Scaling Up forms. By far, the two forms that most revolutionized our business were the One-Page Strategic Plan and the Face and Pace.

The One-Page Plan forces long-range strategizing by telescoping backwards. First, you address the core values of your business—the things that should never change about the way that you work, no matter what. Would you lose money to uphold this value? If the answer to that question is no, then it’s not a core value. Next, you sketch out your 10-year goal, allowing yourself to dream a little bit, and then you look three to five years out. Those goals start to feel a little closer, and you realize you can do things today to move toward those objectives. Finally, you outline your next 365 days, coming up with five to seven major objectives that you want to meet for the year, and you develop a quarterly plan, choosing your number one goal for the next three months. The order here is important and, even though it’s more work upfront, it makes the daily goals feel easier and more ingrained.

The Face and Pace is a functional accountability chart—what are the functions of your business and who is responsible for them? According to Harnish, every line item on your profit and loss statement should be owned by someone. Frankly, it was a struggle to complete this form, and we put it off for a while because it was painful. We began to see gaps, areas where no one was responsible and areas where we had overlapping responsibility. When we did complete the chart, it didn’t follow the book’s framework at all, but it did accurately describe us. Specifically, we realized that Adam and Kevin were providing similar functions in different areas of the company, leaving a glaring lack in sales and marketing. Once we had completed the chart, Adam and Kevin actually came to me with a proposal for reassigning their roles to align our operations with the framework.

Of course, with any practical guidebook, outcomes are everything. The meeting cadence has given us a structured way to come together to address common goals. I was originally afraid of the daily huddle, but now I can’t imagine trying to run my business without it. I think any business leader knows that there is often a disconnect between what is really going on day-to-day and what should be going on. The daily huddle has given our employees more visibility, brought daily clarity, and immensely improved communication. Adam describes the effect of the daily huddle as the difference between going into battle with couriers vs going into battle with two-way radios.

Overall, the One-Page Strategic Plan and the Face and Pace Chart have empowered our team, giving more ownership while also putting up guardrails and providing context for decision-making. Just as important, the framework has given me comfort and made me more willing to delegate responsibility. Often, it’s difficult for the founder of a company to let go—but insisting on overseeing everything yourself makes you the single point of success or failure and is a recipe for stagnation. The framework provided in Scaling Up has helped me identify areas where single points of failure existed and move toward eliminating them.

Where the Face and Pace Chart was a painful exercise before, it is now comforting and exciting, creating real clarity about who’s responsible for impacting what. Recently, the Kopis Leadership Team met to go over the yearly budget for 2017. I came to the meeting with the administrative budget, Kevin came with the operational budget, and Adam came with the marketing budget—and we were able to challenge each other, modify, and adjust. We have never had a clearer view of what our year could look like, where we have risk, where we have opportunities, and what we need to do to make it happen.

I’d recommend Scaling Up to any business leader at any point in the year—but especially as you are reflecting on past performance and making plans for your new year. Like some of the best personal planners, the framework in the book has the uncanny ability to be both prescriptive and a process of discovery at the same time. I make it a point to work through the book yearly and am now on my third read through. With each iteration, our process becomes more refined, and our team gets more focus and clarity—as though we have cellophane wrapped around our heads and each year we get to remove another layer.

–By Andy Kurtz, President and CEO at Kopis

Since 1999, Andy has served as CEO of Kopis, a development firm focused on one-of-a-kind custom software development, application development, Database Administration services, mobile app dev, and more. In 2003, he also founded Vigilix, a company that has quickly become the leading provider of remote monitoring and management solutions for the retail and hospitality industry.