The Art of a Good Office Prank

I admit it. I love playing practical jokes. Especially on my coworkers—and especially on one in particular (more on that later). There is nothing quite as satisfying as the thrill of pulling off a prank that has taken hours of planning to get just right. Then there are the little ones that take almost no planning but are still just as fun. In this article, I thought I’d share some of the jokes I’ve played on my fellow employees here at Kopis over the years, and in the true spirit of “turnabout is fair play,” I’ll share some good ones that have been played on me in return.

But first, a few strict guidelines we adhere to with any prank. All good pranks:

The success of a prank, many times, lies in the ability to target the right person. Let’s face it, not everyone can take a joke, so identifying the right person or people is critical. The best person to target is someone who knows they deserve it, and someone within your culture who’s developed a camaraderie and track record of being able to dish it out as well as take it.

In my case, that person is one Bradley J. Smith, a senior member of our team, who spends a large amount of his time with new client engagement and sales. Bradley and I have a long history, pre-dating Kopis in fact, as we worked together at Datastream many years ago, so that helped even further fan the flames of fun, culture-building “push the limits” pranks over time. Our track record, and the years we’ve spent together working and respecting each other as peers at Kopis, made him the best target a guy could ask for.

Bradley’s a great friend and so poking fun at things like each other’s wardrobe choices are, well…pretty normal. I like to remind him that some days, he alternates between dressing like a cowboy and a Charleston socialite. Wardrobe aside (although I included a few images below to validate that data point, including the pink pants day), he’s a pretty complex (and diverse!) guy; he actually raises bees and chickens in his spare time. At work, he’s successful in part because of his non-traditional approach to everyday routine. In fact, he used an exercise ball instead of an office chair for years. And in the development world, there’s a universally understood tension between developers and sales. Sales typically lives in “whatever it takes to fulfill our promises and keep our client happy” and developers by nature are known to push back and challenge scope creep, because nothing is “an easy change, happy to handle, no problem.” Hence, the natural tension.

While Bradley hasn’t been my only target, he has certainly been my favorite and most frequent; in fact, I even dressed up as him for Halloween this year:

I should mention that what makes Bradley such a good target is that he appreciates the jokes and gives as good as he gets. He and I are also friends. Culture killer: Don’t prank people you don’t like or who don’t like you. That’s just asking for trouble.

This first one is how it all started. There were only a handful of us at the company back in 2011. I had just finished working on a digital signage system for a company in Atlanta. The machine I used for testing had six monitors attached to it and sat out in the common area of our office. I could schedule new content to appear on the monitors at any time and since we had daily meetings in that area, it was easy to plan a prank for April Fool’s Day that year. Here is the image that appeared on the monitors during the daily (internal staff only, no clients!) meeting:

After realizing that I made Bradley look too good in this image, I later changed the middle image slightly:

Since everyone enjoyed this prank (well, at least those not pictured), I followed it up the next year on April Fool’s Day. In this case, I went all out and planned a murder. Ok, not a real murder, but a fake one complete with “Crime Scene” tape, a chalk body outline, and a list of suspects. The following scene greeted people as they entered the office: 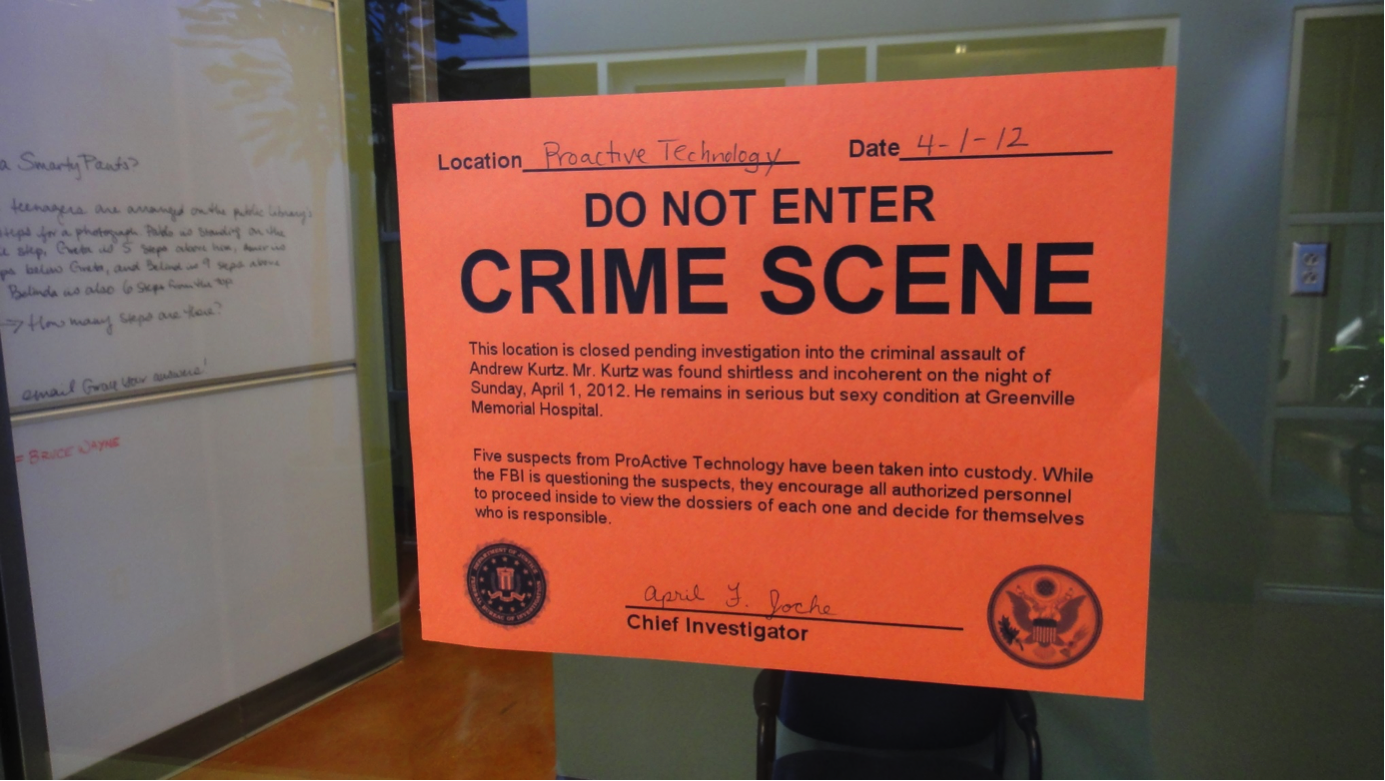 I again used the digital signage monitors as part of this joke, but they were surrounded by the tape and chalk outline (notice the victim pose is similar to the one on the monitor and reused from last year’s prank): 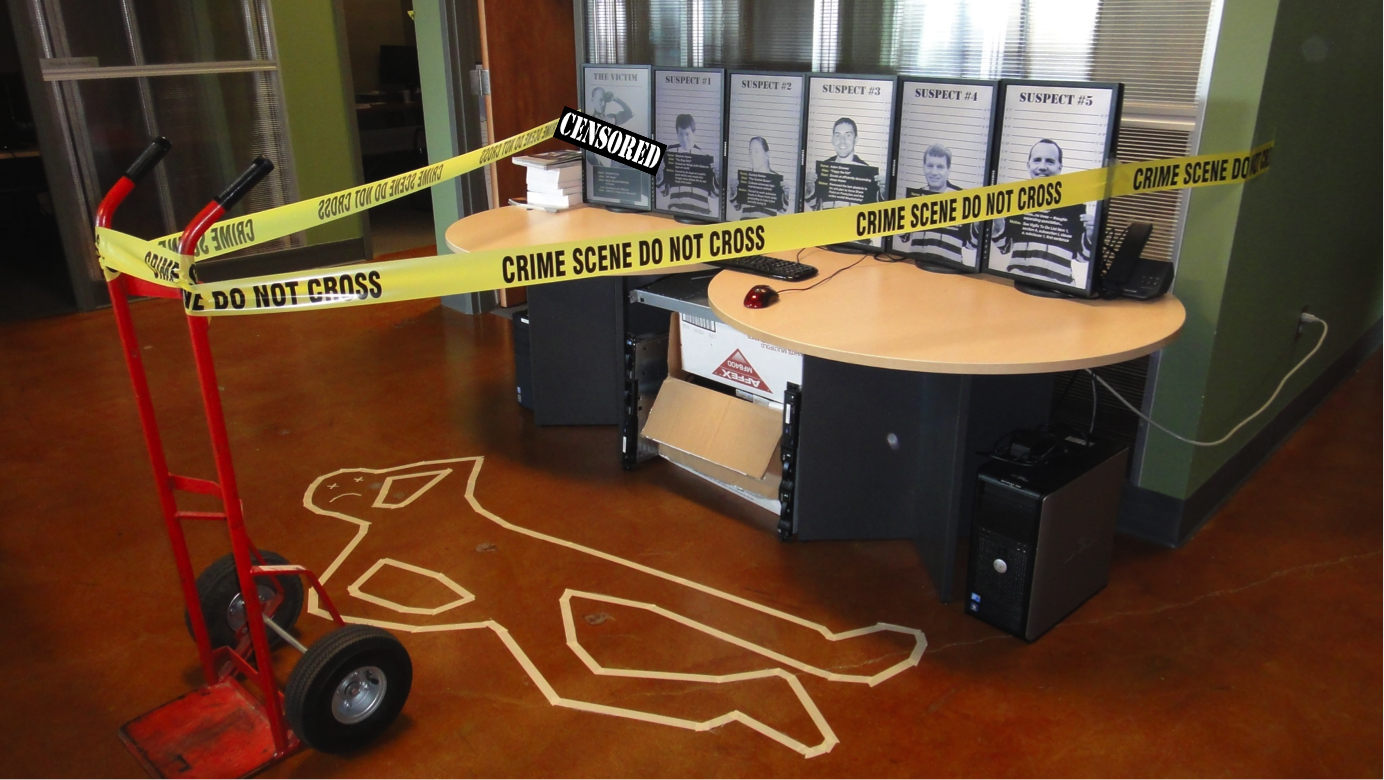 After this, I turned my attention solely on Bradley for a while. My first joke on him was suspending his aforementioned exercise ball from the high ceiling in our office: This one took some effort since I didn’t have a ladder tall enough to reach the rafters. I ended up running rope through a long metal pipe and feeding it out over a beam in the middle of the office common space. I also crafted the netting for the ball by hand with twine, so that took a while too. But I think the result was worth it.

One of the classic jokes to play on someone is to fill their office with something. Since my rules dictate the mess should be easy to clean up, I kept the items fairly tame. Here are some of the items I used to fill Bradley’s office. I have also used banners and signs (the birthday sign was posted in multiple places around the building – a working knowledge of Roman Numerals is helpful for this one): 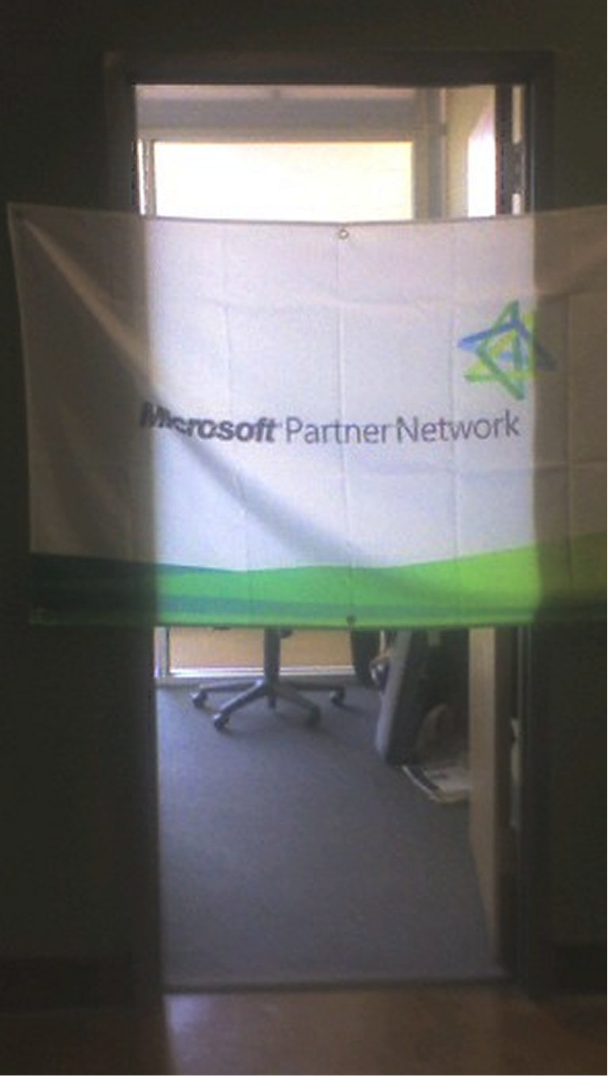 I even printed up a fake certificate and posted it on his door: Finally, I once defaced (more like enfaced) one of his apples, which sadly he refused to eat because he said it was like looking in a mirror (or maybe it was the contamination from the marker – who remembers?): Of course, all of this could not happen without some kind of retaliation. Although most of Bradley’s attempts to get me back were pretty lame, a few were decent. Let’s start with the lame.
I came in one day to find this caution tape covering my doorway and chair: Then there was the sprinkling of Christmas ornaments (although this might have been Adam Drewes, now our Chief Marketing Officer): The pranks got a little better and more creative after that. One day, I came into the office and my door was closed but it wouldn’t open. This was because my office had been filled with every chair in the company: One of the best pranks he pulled on me for which I have no picture was when he used invisible packing tape to seal my file cabinet shut. Since I only use a lamp in my office with no overhead light and my cabinet is black, I didn’t see the tape. He happened to be sitting at the conference table right outside my office as I struggled and cursed trying to open the drawer for several minutes until I finally figured out what he had done.
Of course, he was laughing at me the whole time. Well played, Bradley. Well played.
Probably the most creative prank Bradley pulled on me was the time I came back from vacation to find my office had been turned into the company lounge. Most everything from our kitchen had been moved into my office: Now, I wouldn’t want anyone else in the company to feel left out, so sometimes I have targeted other people in the office. For example, Bradley and I once teamed up to decorate Adam’s bicycle with Christmas lights and ornaments to make it more festive: I also once used all of Adam’s business cards to make a sprawling card house on his office floor (sorry for the poorly-focused picture!): At one point in our company history, we had a “Smarty Pants” award that was given away weekly (don’t ask). Adam was the first winner and was asked to wear a hat that said, “Caution: Smarty Pants” on it. I couldn’t resist working a little image magic and changing it slightly: We also had one of those floating air sharks in the building for a while, so I used it as a prop in a prank email that I sent to the company about Candus Wester, one of our senior developers: Several other developers and I also teamed up recently while Candus was on vacation to move her entire office out into the common area of our space: We turned her actual office into the “Kopis Grieving Grotto” and posted a sign on her door indicating she was involved in a terrible accident while climbing Mount Rainer: 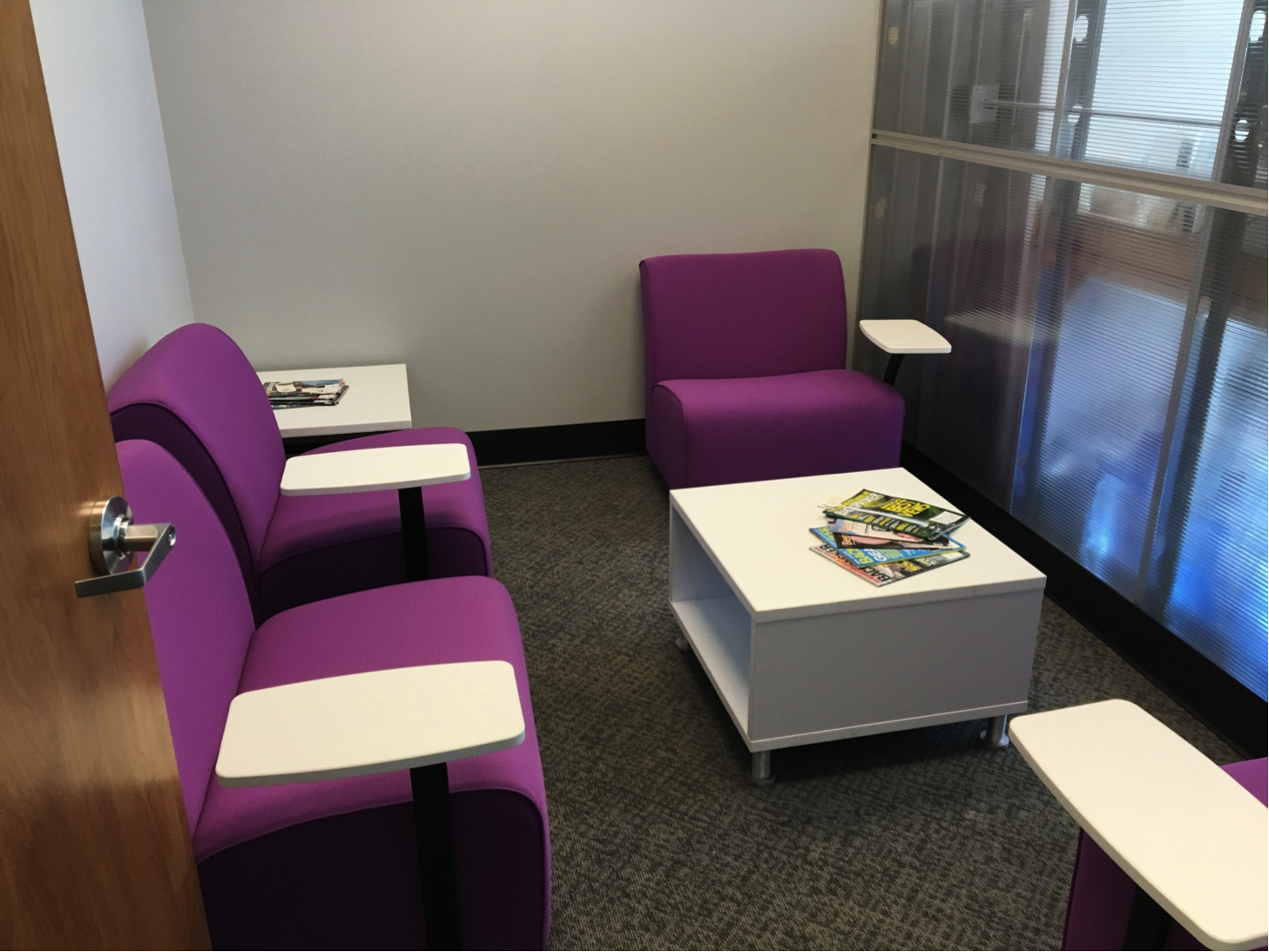 By the way, her birth year on the notice was a joke too. She isn’t actually 65 years old, although interestingly nobody really noticed.
Those are the highlights of the pranks that have been played here at Kopis over the years. They certainly make it a fun place to work since everyone is a good sport about it. Thanks to everyone pictured for letting me embarrass them like this!

–By Jon Hester, Senior Software Developer and Architect at Kopis
Jon Hester is a senior software engineer and architect at Kopis. He has been with the company for over 10 years and specializes in business analysis, user interface design, and complex problem solving. In his spare time, he enjoys computer gaming, reading, activities with his kids, and playing practical jokes on his coworkers.