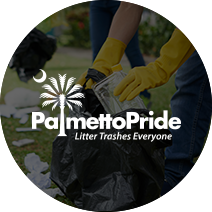 PalmettoPride is a non-profit organization that promotes a beautiful and litter-free South Carolina. Much more than a beautification effort, the multi-faceted organization is a true public/private partnership comprised of state agencies, concerned citizens, corporate sponsors, and community and civic organizations who all work together to raise awareness and educate communities about the full impact of littering.

The organization runs numerous programs, seminars, and events throughout the year. For example, PalmettoPride oversees the popular Adopt-A-Highway program and the Keep South Carolina Beautiful initiative. Educational programs they sponsor include a SCDOE certified litter curriculum, the PalmettoPride Art Contest, and Litter-Free Games.The organization also works with the state legislature to revise litter laws and provides free courses for law enforcement and community leaders, teaching about the economic impact of littering, and preventing crime through environmental design.

Clearly, PalmettoPride is a powerhouse organization that does a lot for our state. So, when they approached Kopis to help them update their Litter Busters Hotline, we were excited to help out.

“When we started working with Dave and Rob and the rest of the Kopis Smart Government team it was during the process of creating an entirely new application for the LitterBusters Hotline,” said Sarah Lyles, Executive Director of PalmettoPride. “In the course of our conversations, we began discussing a custom mobile app because we are too sophisticated of an organization to not have one.”

Originally, the LitterBusters program used a third-party application called Trash Tracker that was difficult for the organization to use, and they were ready to upgrade to a customized solution that truly fit their needs, “The Trash Tracker app was more involved than what we really needed,” said Lyles. “For a short time, we moved to an application called See Click Fix, which is a great tool for municipalities to use. Initially, this program seemed like exactly what we needed. However, the reporting features caused a challenge for us by creating false expectations. Reporters were looking for us to come do pick-ups or remedy their complaints, which is not what the LitterBusters Hotline is about.”

The LitterBusters Hotline is an awareness campaign that needed a simple, straightforward mobile solution. The goal of the Hotline is to encourage residents of South Carolina to take pride in their state by reporting litterers and trash hotspots. Residents can visit the website, call the 24/7 Hotline, or use the mobile app to report littering, unsecured loads, illegal dumping, and more.

“The LitterBusters Hotline is a fantastic awareness campaign for our organization,” said Nicole Meares, Communication and Marketing Manager for PalmettoPride. “Studies show that the majority of people who litter do so on purpose, and that awareness campaigns are effective in reducing littering. Our program works directly with the SCDMV to generate a courtesy letter that is populated with information from the caller and mailed directly to the offender. Even a small reminder like this can help people understand the bigger impact and make them less likely to litter in the future.”

The Smart Government team at Kopis created a streamlined mobile solution for PalmettoPride that fully integrates with the automated system that the DMV uses to produce the courtesy letters.

“We sat down and talked with the Kopis team about our wants and needs, and they really listened to us,” said Meares. “They simplified the app to give us what we needed and only what we needed, and they even advised us on branding and how to incorporate our logo. The final product has been so intuitive and easy-to-use.”

So far, the team that spearheaded the LitterBusters project at PalmettoPride has been pleased with the results.

“Working with Kopis has been refreshing for us for many reasons, but for me to be able to explain what we need this app to do having limited knowledge of how any of it works and have Kopis deliver exactly what we wanted is probably the best reason,” said Lyles. “Our previous websites and mobile app were cumbersome in both the development and maintenance. They also relied on packaged software that we had to adapt to. With Kopis, the team created what we wanted and adapted the product to our needs. I have already recommended the company to a few people who have asked who we used.”

In addition to simplifying the look and feel of the LitterBusters mobile app, the Kopis team was able to use the technology to automate some of the internal processes at PalmettoPride, reducing the administrative burden for the busy organization.

“One of the most exciting results of this project has been the automation,” said Meares. “We used to have to maintain two separate databases. One for the mobile app and one for the website. Anytime anyone reported something through either method, we’d get an email notification. Then, someone had to forward the notification to an enforcement program manager. Kopis took a campaign we offered that required a multi-step process and made it completely automatic. There’s now one database that integrates with the DMV system without us having to do anything.”

Finally, PalmettoPride has been impressed with the ROI that they’ve already experienced with the release of their new mobile app.

“As the marketing manager, I’ve been most pleased with how this app has helped us further our number one mission, which is awareness, and to get our name out there,” said Meares. “ When we launched, we didn’t realize that our app would generate so much buzz. We were surprised by how many media outlets picked up the story and how many people downloaded the app within the first week. This project also brought us to more millenials, which is a relatively new market for us. The budget for this project was reasonable compared to what we were paying before, and considering how the app has already brought us more name recognition and broadened our audience, the ROI has been great.”

“Annually, the custom LitterBusters app will cost us about the same to create and host as our previous apps. As a non-profit, public organization, it feels great to make a nearly cost-neutral decision and have results like this,” said Lyles. “Of course, even if it cost more, it would be worth every penny because we got exactly what we wanted and needed. No more adapting our processes to fit a third-party application, no more administrative headaches because of false expectations. This is a prime example of getting what you pay for.”

“Working with Kopis has been refreshing for us for many reasons, but for me to be able to explain what we need this app to do having limited knowledge of how any of it works and have Kopis deliver exactly what we wanted is probably the best reason.”