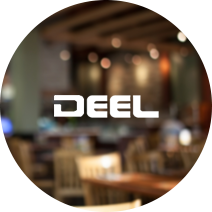 DEEL Media was founded in 2007 to solve a problem in the digital menu board space.

Theaters, restaurants, stores, and amusement parks were frustrated. There were lots of digital menu board providers in the marketplace, but their solutions were failing.

“What it came down to was that customers were frustrated by trying to deploy digital menu boards using platforms not developed for that purpose,” said Bill Clapes, DEEL Media’s Cofounder and President. And the resulting high costs and painful implementations made digital menu boards a frustration point, rather than a positive organizational change for many of these customers. “Customers finally got to a point where it cost too much, or the platform was too immature and couldn’t do the things they needed to do to best merchandise their products.”

Bill and his business partner, Bryan Lynch, saw an opportunity, and decided to create CARBON™: a synchronized digital menu board system that would fulfill customers’ expectations and allow them to more easily create, implement, and manage digital menu content across multiple locations.

Critical to DEEL Media’s success, however, was to identify a custom software development company to build the inner workings of the software. DEEL Media was specifically looking for a partner that would bring a high level of critical thinking and insight to the project, as well as the technical expertise to actually create the complex system and database required.

Based on a recommendation from a business connection, DEEL Media identified and approached Kopis with their research and high-level functional requirements. Kopis developers in Greenville, SC quickly grasped the concept and tackled the project, creating the first version of CARBON™ in a matter of nine months.

According to Bill, “One of the things that got us going so quickly was that Kopis already had a foundational database built. Kopis had an interface created, and they leveraged that to build CARBON™. Additionally, they already had Vigilix, their underlying technology system that ensures everything is sending and receiving properly.” The results, according to Bill, were staggering. “What Kopis has built for us is the ability to manage large networks of digital content at scale with very, very, very few people. They did such a great job for us that once we went forward with the platform, we took over giant accounts that we could never have before. We would not have that without what they did for us.” In fact, when DEEL Media released their first iteration of CARBON™, Bill noted that the system quickly became the platform of choice for a number of leading national accounts, including Regal Theaters, Pizza Hut, Pilot Travel Centers, and Universal Studios Theme Parks. “I don’t know if we would have gotten that growth if we didn’t have the platform that Kopis built.” CARBON™ was also so popular and flexible that it allowed DEEL Media branch out and take on projects that they wouldn’t otherwise have been able to. For example, DEEL Media was able to partner with fashion dealer Bergdorf Goodman in New York to implement a massive multi-language, touch screen directory system for their stores. Beyond their initial growth boom, DEEL Media has consistently seen ongoing annual growth between 18 – 20% ever since. The overall experience? Bill sums it up best: “Without the development that Kopis did for us, we would not have a business.”

“Kopis did such a great job for us that we took over giant accounts we never could before.”